Ban on Iran and importance of Chabahar Port for India

The US had allowed India to temporarily import oil from Iran, this exemption was given for six months and shortly before this exemption expired, India also reduced the oil imports from Iran as per the US It has been announced to do zero but this announcement was made by the Indian Ambassador based in the US instead of the Petroleum Ministry of India. The US Secretary of State, who visited India after this announcement, praised India, but the Government has made claims outside its Ambassador in India’s Parliament. These double statements of India have highlighted the complexity of Indian foreign policy in tensions between the US and Iran.

For the past few years, India-Iran relationship has not been limited to mere purchase of oil. India’s financial investment and diplomatic efforts in Iran’s sea port Chabahar have given it an opportunity to circumvent its adversary Pakistan, which has been blocking India’s land route connectivity to Afghanistan. With the membership of the Shanghai Cooperation Organization (SCO), the port has also assumed a supporting role in India’s new Central Asian policy. India wants to revive trade with Afghanistan through this port. The lack of transit route to India by Pakistan continues to reduce the trade deficit between India and Afghanistan, but India’s Iran policy is being affected by the interests of America, thus affecting India’s political and economic interests in Afghanistan and Central Asia. Can occur.

The pace of progress has been very slow so far, despite the liaison agreement between India, Iran and Afghanistan keeping Chabahar at the center during the Indian Prime Minister’s visit to Tehran in 2016. India’s acquisition of Chabahar, located at a distance of 70 km from China’s Gwadar port, funded by China, was widely publicized, but until a few years ago there was little ground work.

In the year 2018, the authority of Chabahar’s Shahid Behesti port was handed over to India and it was expected that India could use this right to fulfill its economic interests. The movement of cargo ships to the Chabahar port, which is a safe distance from the volatile Strait of Hormuz, has increased, but the Indian exit from the United States through the Joint Comprehensive Action Plan (JCPOA) and the US rebate in particular to India received an endowment in May. The aspirations have been hit.

The Indian joint venture ‘India Ports Global’ implementing the Chabahar project has failed to pay the European company for the supply of hardware. It has also abandoned its search for an agency to manage the port. India’s changing policy towards management of Chabahar Port in the short term is also confirmed by the budgetary allocation for the year 2019-20 which has been reduced from Rs 150 crore to Rs 50 crore.

Iran, already struggling with the crisis, has become even more disappointed by the changed Indian policy due to US pressure. Tehran expected India to stand firm by exercising its strategic autonomy, but New Delhi neither considered it appropriate to negotiate American hostilities, nor opposed those countries (Saudi Arabia and Israel) that Iran for nuclear ambitions Intends to punish

Seeing Indian interest in Iran as detrimental to its strategic interests, Saudi Arabia maintains that India, its ‘imaginary interests’ in Iran, its genuine interests vested in Saudi Arabia and the Gulf countries, where thousands of Indians are finding livelihood and Unnecessary has been giving more importance than remitting money. Saudi Arabian strategists often ask questions about how many Indians earn a living in Iran. Undoubtedly, the presence of Indians in Iran is negligible but the Indian decision to invest in Chabahar Port in Sistan-Balochistan Province is not based on this one point.

Saudi Arabia has been expressing its dissatisfaction with the Chabahar project. In the year 2016 published in the paper Chabahar and Gwadar Agreements, and Rivalry among Competitors in Baluchistan Region, Saudi Arabia, which was titled ‘Chabahar and Gwadar Agreement and Rivalry between Competitors in the Baluchistan Region’, clearly stated its viewpoint.

Ignoring the competitive suggestions of China and Russia, understanding the macroeconomic possibilities of including India as a partner in the Chabahar port project and the impact on foreign policy, Iran favored Indian ambitions where Pakistan was sidelined. While doing so, India was looking for land routes to reach Afghanistan and Central Asia. Iran predicted that India would also receive US support for the project as it would reduce Afghanistan’s dependence on Pakistan’s Karachi port. Thus in the event of the US re-banning or obstructing the Hormuz Strait, Chabahar would provide Iran with a free and barrier-free port for trade with the world.

India’s membership in the Shanghai Cooperation Organization (SCO) and BRICS (BRICS) gave New Delhi an opportunity to strengthen its position in Central Asia by building closer ties with Russia and other member countries. There has also been a promise of a broad increase in current trade ($ 2 billion) following the increase in this connectivity expansion through Iran. 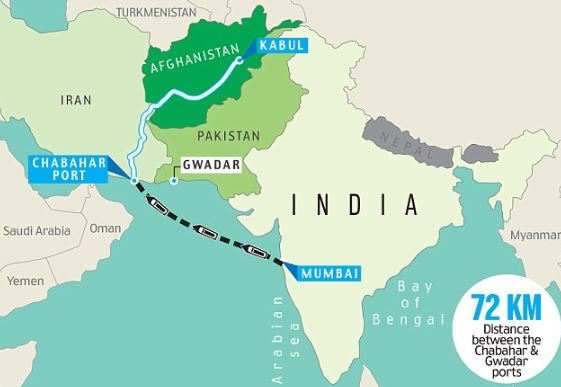 In 2000, India, Russia and Iran agreed on the 7200 km long International North-South Transport Corridor with rail, road and sea transport. This corridor will connect the Indian Ocean and the Persian Gulf to the Caspian Sea via Iran and then reach northern Europe via Russia. Under this, rail routes to Iran, Azerbaijan and Russia will also be added. The commencement of this corridor will boost trade between Russia, Iran, Central Asia, India and Europe and save time and cost in movement of goods.

China has set an example in relation to trade potential in Central Asia. Its business is worth $ 50 billion and is growing due to the ‘Belt and Road Initiative’ (BRI). This trade with Russia is worth about $ 100 billion. All the landlocked countries of Central Asia were excited about the prospect of a new sea port at Chabahar. This port can challenge China’s BRI with new entry routes developed by India and Japan, while being free from the payment problems posed by the US embargo on Iran.

When Chabahar was exempted from US sanctions imposed in November 2018, aimed at aiding the reconstruction of Afghanistan, it was also speculated that the US would like to use the port due to its military presence in Afghanistan. It was also alleged by some diplomatic sources that the first Indian consignment sent to Afghanistan via Chabahar also included the supply of military supplies to US military forces.

Although the port in South Iran has been kept free of restrictions, companies trading here complain that it has become almost impossible to transfer funds for their projects through the Swift system. The US government has not explicitly specified how companies operating in the port’s free zone (where more than 160 Afghan companies are also registered) will receive the benefit of the exemption from the ban.

India and other countries have made Iran aware of the challenges related to Chabahar but Iran considers the problems of these countries as non-legitimate. The Chinese government engaged its public sector companies to maintain China’s national commitment to the port when Chinese private companies began to consolidate their business at Gwadar Port due to violence and anarchy. India has not expressed any such resolution.

The United States has emerged as a strong partner of India in the last few years, with India’s economic and strategic interests vested in West Asia and Israel. But Iran has its own importance for India, with Chabahar, not only can India balance Pakistan’s Gwadar but it is also important in terms of increasing trade with Afghanistan. Apart from this, India wants to have uninterrupted access to the countries of Central Asia which can be possible from this port. At the same time India can also balance China’s Belt and Road initiative. Iran is important for India in the above situation. India’s view that after the change of Trump administration in the US in the year 2020, the current situation will change, this idea can be misleading. If the Trump administration returns again, then India will have to take tough but necessary decisions keeping in mind its interests because on the one hand, there will be a policy driven by American interests and with this policy, India needs to take its interests into consideration. It will be difficult to complete. So on the other hand, there will be a fast emerging Russia-China alliance in which Iran is also trying to join. China has also presented a number of challenges for India in the near past, in such a situation it can be complicated for India to implement foreign policy operating with its interests. India needs to balance its policy with the understanding of the present circumstances. This policy can be based on India’s autonomy. Based on this, India can conduct its foreign policy keeping its interests in mind and this policy should be balanced to the US and Iran.